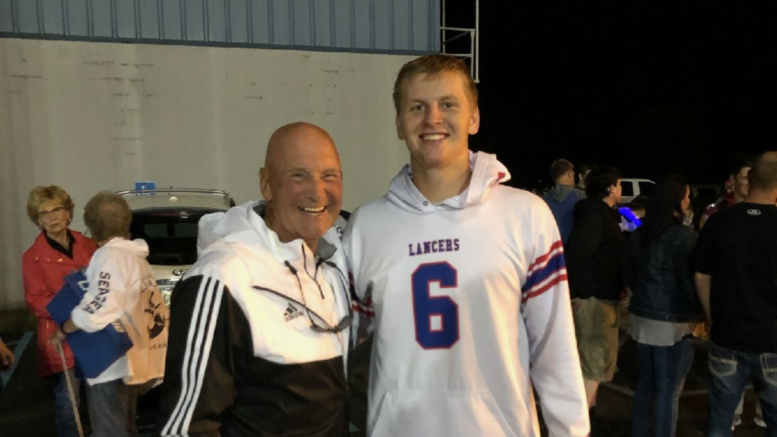 Connor Vierstra 6’4” 212 lbs. and the Lakewood Lancers pulled of a win Friday in an exciting 27 to 20 game over Fairfield Union HS.

Connor opened up the night by completing a 23 yard pass to WR Noah Siadach for a key first down and then threw his first TD to WR Ryan Olgelbee for an 18 yard near perfectly run skinny post to the back of the end zone. 7 to 0 Lancers.  In the second Quarter, Vierstra found his cousin, WR Colt Vierstra on dig across the back line of the end zone for an 8 yard roll out strike, making 14 to 0. Fairfield Union then scored twice to make the score 14 to 13.

QB Connor went back to work in the 3rd Quarter, scoring on a rocket 42 yard fade to again WR Colt Vierstra on a beautiful thrown ball proving he is one of Coach sink’s super QBS this year.  Fairfield Union was hanging tough in this game and in the 4th Quarter scored one more time but because of an earlier blocked extra point it was 21 to 20 Lakewood.   Lakewood then put together a super drive using the tough running of RB Connor Roesink and QB Connor Vierstraand mixing in a few good passes got the ball to the 8 yard line whereQB Viestra rolled to his left, reached back and threw a strike on the run to WR Viestra and that put the lancers up 27 to 20.   Then in the final couple of minutes Roesink took over with 4 outstanding runs getting 2 first downs and That was “All She Wrote”.

WR Colt Viestra had his best game yet with 10 receptions for 97 yards and 2 TDS. QB Connor Viestra had his best night ever by putting up 247 yards passing with a 63% completion average and 4 TDS.   I would say Coach Lee’s  Lakewood Lancers are to be reckoned with this year in their division and if they keep improving every week I am sure that will be the case.

Be the first to comment on "Connor Vierstra QB Lakewood has Big game and a W !!!!"