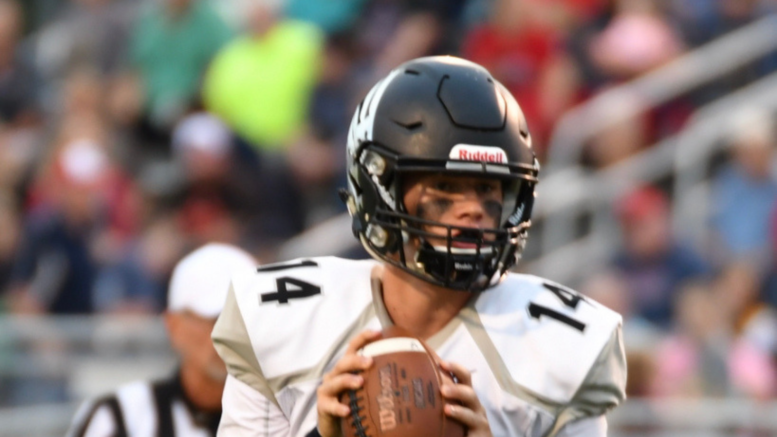 Only 2 games into the season and Judah Holtzclaw my 6’5” 218 lbs junior QB at Westerville Central HS in Westerville Ohio is already at a record breaking pace of 4 TD’s per game.   Judah,  did it again Friday by throwing 3 TD passes and rushing for one more to lead the Warhawks to a victory over Grove City HS, 56 to 7. He threw for 277 yards and was 18 completions in just 24 attempts which is a cool 75% completion average.

Judah threw TD passes to his highly recruited RB Myles Williamson and then threw 2 more to Luke Swaney his highly recruited WR of 21 yards, and with 40 seconds left in the half another of 38 yards.  Also, he ran for 10 yards to complete the second game in a row of being responsible for 4 TDS in the game.  Both of the first 2 weeks in a row Judah did not play a complete game but was done for the night at the end of the 3rd Quarter due to a running clock and an incredibly large lead.

This week John Cooper former Ohio State head coach and one of the elite recruiters of top talent to ever coach college football selected Judah Holtzclaw as his choice for the top performer in the entire State of Ohio in high school football.  I will take John’s opinion on a young player any day of the week, but certainly congratulations go to Judah and his performance this week.

Even more amazing are his stats for the first two weeks.  Judah Holtzclaw for the year is 27 of 39 for a 69 % completion average and 7 passing TDS and one Rushing TD and a total of 468 yards of passing.  Yes, and he is still just a junior.    See Judah play this week against Northland HS.