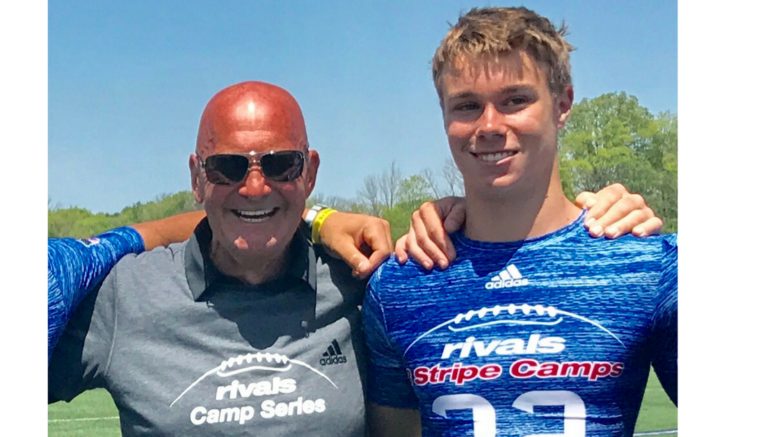 Newark Catholic HS in Newark Ohio found a way to Defeat D1 HS Watkins, Pataskala, Ohioon Friday but they needed the aid of their number 1 Wide Receiver Lucas Pierce. With just a minute or less in the game NC was down 14 to 7 and even though they had clawed and fought the entire game it looked like they were going to add another big L this season.  A Loss was not in the mind of one of the kids that has really worked hard this season after switching positions and working all summer with Coach Sink on a 4 or 5 per week session schedule since last Feb.   For all of you who think this kind of work ethic doesn’t work, watch this!! With just seconds left in the game Lucas  Pierce decided to put all that training into one route, taking off from the X receiver spot he ran about 8 yards with 100 % of his speed engaged, dropped his right shoulder took two steps, dropped his left shoulder after a perfect stick with his right foot and hit the gas—- Boom !!!!, he blew by the defensive back and to this moment I am sure that kid has no idea where Lucas went, and is probably not sure even now.

Jumping up and down was the next thing you saw as Lucas smoothly extended his arms and caught the perfect (*Back-Breaker drill) ball 5 yards deep in the end zone after a 50 yard throw from his QB.  The celebration was interesting in itself as no one can jump like Lucas (I have watched him dunk the football over the cross-bar backwards standing still under the goal post) on the Catholic team, so you saw Lucas way above anyone else on each jump of joy.    14 to 13 is the score and Bill Franks team is not to be denied, so he goes for 2 and you guessed it, the Green Wave defeat BIG Watkins 15 to 14.

Lucas is just beginning, as Ball State, Kentucky, Louisville, and Michigan State are all showing great interest in Lucas and it looks like the offers are about to start rolling in.   No one will be more appreciative than Lucas when they do, for he is one young man that has put urgency in his training traveling all over Central Ohio to be in sessions with Coach Sink and with major QBs and WRs that him work hard and perform at the highest levels.  It has been an awesome privilege to work this young man of integrity and honor.   Go Lucas, Go to the top…….( *Back Breaker drill is a famous drill of Coach Sink’s that all of his WRs love to practice, but helps immensely in the production of catching the long fades.)