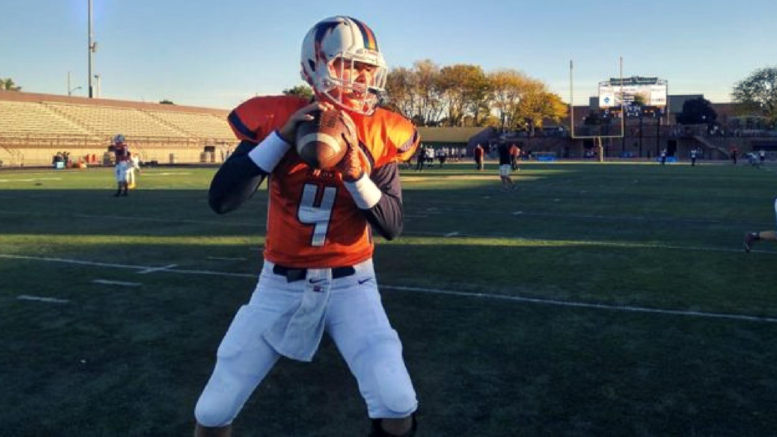 Trevor Bycznski QB 6’5” 230 lbs from Berea Midpark HS in the Cleveland area of Ohio, where football is still King of the Hill, had an amazing night putting up 461 Yards passing and 4 TDs on 27 completions in 34 attempts with a completion average of  and 0 INTS.   Now that will get you a QB rating that rivals anyone in the State….

Trevor blew up the North Ridgeville Rangers to the tune of 49 to 14 and put the ball into 7 different receivers hands and that will get you the NEOSI Player of the Week award without too much trouble.    Seeing the field is one of the great assets our Junior QB has going for him but also the ability to run when and if he needs to is another. With his frame he is a load to bring down when he does put the ball away and run.

Trevor found 5 WRS, one tight end, and his outstanding running back Bryce Agnew , during the course of the game. Louie Vega was one his most productive WR with 7 catches for 112 yards and one of those TDs.  Garett Waite had a career high game with 8 catches for 125 yards and a TD, and Dwayne Holland also had 3 big catches for 175 yards and 2 TDS.  Now that’s what I call “spreading the wealth” by putting the defense on notice that you never know where Trevor is going to throw it and that is a nightmare for any defense.

Trevor is well on his way to being the top QB in Northern Ohio and maybe the state before it is over.   Congratulations on an awesome night big Man.   This coach is one proud observer of a soon to be D1 College QB.   Watch his week 4 highlight film here:

Be the first to comment on "Bycznski Throws for 461 yards NEOSI Player of the Week!!!!"