We spent from Saturday to Wednesday in Myrtle Beach SC for the Offense/Defense, All American Game Eastern Regional.   Preparation was as good as you can do when assembling Elite athlete’s  from all over the Eastern half of the US.  Judah Holtzclaw my 6’6: 225 lbs. Westerville central HS QB, was invited to the event and he made the most of his opportunity. After 3 practices and a walk through with his head coach Willie Bates from New Jersey,  Willie had Team SSC #1 all ready to play. They were matched up against SSC #2 team for the last game of the camp, but had beaten in scrimmages the two days before Teams SSC #3 and SSC #4, so this game was really for all the marbles.    The Marbles we got !!

After starting out with a bang by Judah throwing a 50 yard crossing route to Gabe Decker from Charlottesville, Va., a multi-talented LB – SR – TE who is about 6’2” and 230 lbs. and Gabe took it to the house.   The extra point failed but we were up 6 to 0.   Head defensive coach was Stafon Adams now coaching in Stone Mt. Georgia but has played for 3 different NFL teams including the Raiders.  Because of a limited amount of players about 75% of our team had to play both ways and Stafon had the boys organized and playing tough D.  Due to our lack of left tackle play and a good defensive end from Illinois on Team #2, they shut down our high powered offense for the balance of the first half and got into the end zone and scored the extra point, and lead at Halftime 8 to 6.

Coach Bates made the adjustments at the halftime break he needed to with Judah assisting some of the decisions. One was he moved our big strong kid to TE, Gabe Decker and we did not hear anything from the defensive end from Illinois in the entire second half.  Second,  we threw 2 TE screens that amounted to 25 yards each to Gabe and he ended up with about 100 yards of receptions from Judah, and was a big contributor to Coach Adams tough defense by making several solo tackles. Another of our star Athlete’s was a young man by the  name of Caleb Treadwell from Chicago Hillcrest HS in Illinois who was a shut down Corner on defense and caught a beautiful fade in the left corner of the end zone  in 4TH Quarter from Judah giving us a 28 to 8 lead that would last for the remaining 1:16 seconds in the game.  Another fine athlete that helped us win the game was Yasiir Daniels, who played incredible Safety and was the WR on the right side that had to get a lot of double team coverage and picked up a defensive pass interference call that was crucial.  He also just missed a deep fade, not being used to a QB like Judah who can throw a 60 yard 2 ball down the field, with accuracy.   Yasiir was also held pretty good for another TD we should have had.

Judah ended the game with over 175 yards of passing and 2 TDS and 1 rushing from 2 yards out where he pounded it in , in Judah Holtzclaw fashion.  Pictured below is Judah with Gabe Decker certainly 2 of the Stars that could have been MVP’s.   Pictured at our walk through above from left to right are Gabe Decker, Yasiir’s brother, Yasiir Daniels, HC Willie Bates,  JudahHoltzclaw,  Coach Sink and Caleb Treadwell.     Even though the facilities to play the Championship game for the Eastern division  left a lot to be desired as we played on the Pelican’s baseball field, it did not deter the fine athlete’s as they made the best of a tough situation.   The Elite members of the 4 teams will be invited to play in Nashville at the Titan’s stadium for the O/D All American Bowl Championshipin late March or early April against the best of the West. So proud of Judah Holtzclaw as he proved to be one of the Top QB’S in the country. 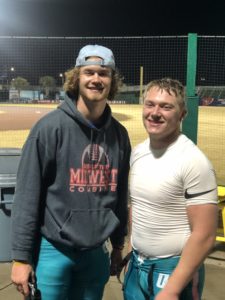