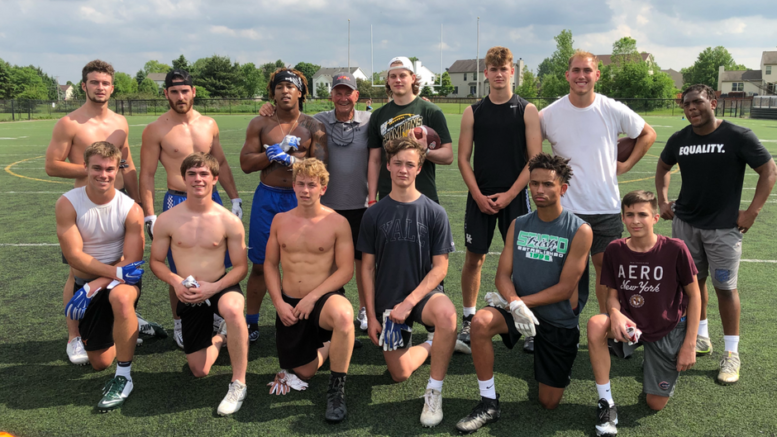 It is very rare when a young athlete is so emotional over being filled with gratitude by being given an award.  But I ask you, “Isn’t this the way it should be?”   So many people are responsible for their success and quite often they are so filled with themselves instead of those that were responsible.   Not the case for my Man Joe Burrow Saturday night in New York City.  As he accepted so graciously the award for the best player in all of football, The Heisman Trophy, my mind went back to Westerville Central High School field and Hilliard Bradley football field where Joey worked out with Coach Sink, the summer before leaving for LSU after his transfer from Ohio State.  His will to succeed was so prevalent even those days when he was only known to Ohio State fans as the # 1 backup QB.

Joe Burrow was working so hard to improve every portion of his game and I, Coach Sink, asked him after he had thrown about 200 balls, “Is there anything else you would like to work on, Joey, before we close it out (after 1 ½ hours of throwing)?”   He said, “Yes, do you mind if I throw a few more skinny posts into the end zone from the 35 or 40 yard line?”  Coach Sink, never doubting that he was headed for some big success replied, “Not at all my Man, we can stay all day if you like.”   We finished, with Joe Burrow throwing 6 more throws as he threw, taking turns that day with Griffin Dahn, another very talented QB of Coach Sink, and a then Freshman QB, Judah Holtzclaw that was amazingly keeping pretty good competition going with these 2 super college QBS.

As Joey took his turns he threw 3 perfect strikes into the end zone and then backed up and threw 3 more from the 40, hitting his target both from the right and left side of the field going 6 for 6.   Joey Burrow turned to all the receivers which included, Bennie Snell now of the Pittsburgh Steelers and Charlie Moushay a then Kentucky special teams All- American, plus several other talented football players,  and thanked them individually, and Coach Sink,  and the other 2 QBS for coming to throw with him.   You see that Joe Burrow, is a man filled with gratitude for those who played even a small part of his success.

This comment was from a Coach Sink article from one of the Joe Burrow workouts in the summer of 2018:  Then we had visiting for both sessions, the former Ohio State and  soon to be  QB at LSU,  Joey Burrow, and man, are those Tigers lucky to have this man coming to be the leader of that team.  Look out Nick Saban!  The way Joey was throwing proves he is also bound for the NFL very soon .  It was quite a shoot-out.    Just so you know, Coach Sink does know talent when he sees it!!!!!!   You can also see the prediction of the LSU victory over Alabama.   The photo above is from that may 23, 2018 workout.

I am so proud of  Joe Burrow and his Mom and Dad, who raised an incredible athlete and incredible young man of character.

Be the first to comment on "Joey Burrow Heisman Winner"