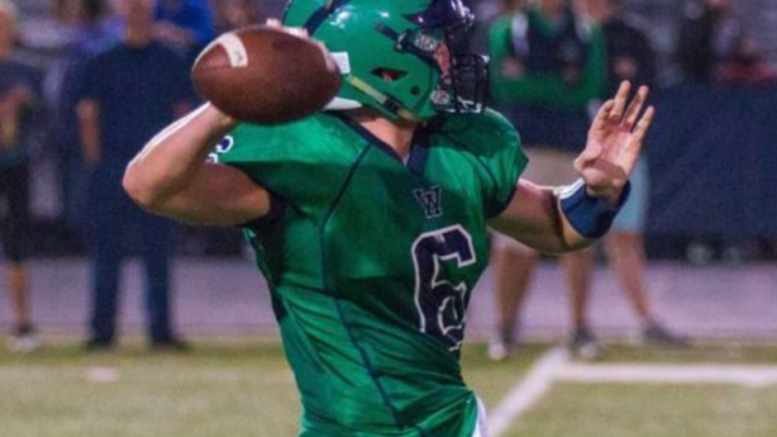 Graham Walker my 6’0” 200 lb QB from Woodgrove HS the offensive Player of the Year in his division in Virginia, is headed to Frostburg State U. and knowing Graham like I do his first goal is grab the starting role as QB and his second is to win the National championship.  A great article appeared in the sports section of LoCoSports and written by Owen Gotimer https://www.locosports.info/2019/01/28/football-woodgrove-quarterback-graham-walker-commits-frostburg-state/

so I thought I would let you read some clips from this article on Graham.

“It’s a huge relief to know where I’m going next year for college,” the 6-foot, 200-pound Walker said. “Now I can enjoy my senior year and train to compete from the start when I get to Frostburg.”

“I chose Frostburg State because I loved the school and also I loved where they are going with the football program,” Walker said. “They have won a lot over the past couple years in Division III, and now, they are moving to Division II. Coach Fitzgerald has done a great job with the program and has made it very clear we will be competitive from the moment we enter the conference.”

In 2018, the DIII Bobcats tore through the CAC going 8-0 in conference and 10-1 overall, finishing No. 6 in the country. Led by sixth-year head coach DeLane Fitzgerald.

“I think I can add a competitive attitude,” Walker said. “Since I’m a dual-threat quarterback, I could give our offense the option to run or throw.”

During his senior year at Woodgrove, Walker was one of the most feared dual-threat quarterbacks in Virginia. After transferring from Battlefield High School prior to his senior year, Walker led the Wolverines to the 2018 VHSL 4A State championship and earned numerous personal accolades along the way:

“Winning a state championship has been a dream of mine for a long time, and I was blessed to have such amazing coaches and teammates,” Walker said. “My experience playing for Woodgrove has been amazing. I wouldn’t trade it for anything.”

Awesome job Graham and may God continue to direct your life for a very successful future.