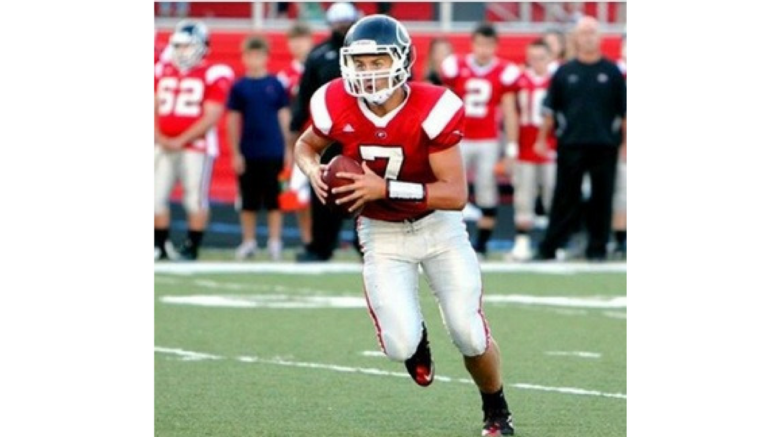 On Saturday night I drove to Mollenkopf Stadium in Warren Ohio , the home of Warren Harding high school and John F. Kennedy High School, who happen to be the 2016 State Champions in their division. Believe me, every bit of that 5 hours plus drive (up and back) was worth it.  Everyone anticipated a very close game, with the exception of my incredible Junior QB, Mark Waid 6’3” 210 lbs from Girard High School in Girard Ohio.  If you watched him warm up, you knew he was sure who was going to win, and did he ever.  It was a steady barrage with Mark passing for 291 yards and 4 TDs, and then running for 130 yards and one more TD.  It was a performance to witness and I for one, am glad I didn’t miss it.

Mark, being the kind of young man he is, gives credit where credit is due.  The Girard Indians defense in Mark’s own word’s played “lights out” and I would agree holding JFK to one score all night while the offense lite up the score board constantly and ended with 42 points of their own.   Coach Pat Pearson’s team wins it 42 to 7. JFK’s only score  was late in the second quarter while Girard put one up in the first quarter and in the second quarter Mark got to throwing his rocket ball and hit Mike Belcik ( a D1 receiver)and Devon Wilson each for a TD pass.

In the third quarter Mark got his solo running TD and in the fourth Mike Belcik, got another TD with a spectacular sweep, but the play of all plays was the final score.  Mark dropped a three step dropped, looked over his receivers and could find no one open, so he started to run to his left and the defense was fighting hard to sack him but with his will and power, that is a hard job to do. He worked the pocket a little more as he has done 100’s of times during his Sinkworkouts, and while getting hit from three sides, pulled the ball up and loaded it and at the last second, found Devon Wilson again, firing a rocket throw 25 yards to the sidelines on the left side.  Waid disappeared in the pile, but Wilson surprised everyone on the defense by cutting the back into the middle of the field and put two outstanding moves on defenders and turned on the jets and took it to the house.

The phone is ringing off the hook for this talented signal caller from multiple top D1 Colleges and I am so excited to watch Mark living out his dream of playing at the next level and maybe even getting paid for it on Sunday.  He has what it takes, and I for one am not surprised by any of this.   For now, the task at hand is the next game Friday and Mark has his head on correctly so he will be ready.   Mark Waid, congratulations on the start of a fabulous Junior year.  3 and 0.