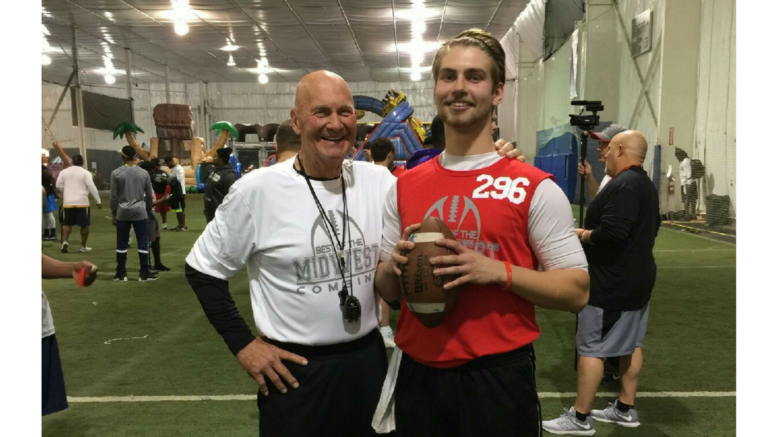 Josh Stewart Hilliard Bradley’s Senior QB has done it again this week knocking off another cross town Rival by defeating Hilliard Darby after last week taking care of Hilliard Davidson.  This week Josh was named Ohio Elite Prep Magazines player of the Week, for his performance putting up 273 yards of passing offense and throwing for 2 TD’s and then Rushing for the third in Bradley’s man handling of the usually stout Darby defense with a score of 21 to 7.

Josh top targets were 6’5” Kory Taylor, who had 12 catches for 96 yards and a beautiful fade in the corner of the end zone for one of the TDs.  His other top WR is 6’1” Daevon Anderson, who  grabbed 6 of those rockets for 109 yards and Zack Hummel caught the other TD on an 11 yard fade.  All of these guys are regularly found in  Sink sessions all year long.   One more young man who is also a regular has really stepped up to make Coach Laparo’s one of the most powerful offenses in the Central region of Ohio is Trey Warner the other slot receiver, and who is also the punt and kickoff return man.

We are really proud of the way these kids have played and believe several, if not all, will continue to play football  on the next level.  Josh Stewart is a prime example of a young man that never quits but steadily works to improve and deserves all the accolades he is getting leading this excellent football team to 4 straight victories.   Way to go Josh and look forward to see what happens next week with you guiding the Jaguars.