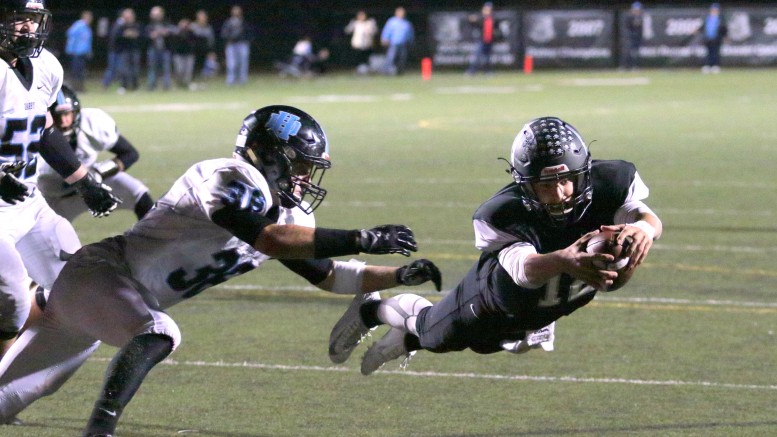 Because I was scrambling to see as many of my QBs and WRs perform as I could, I did not get to the Westerville Central, Hilliard Darby game until 8:15 left in the third quarter.   The battle of the 2 undefeated, #1 versus #2, was worth the price of the admission and then some.   At the 2:51 second mark the people started filing out with the score Darby 13 Central 10.   I turned to some of my friends and said, “you have to be kidding me, these people aren’t really leaving this game with Gavin Lyon as the QB at Central, Are they?”

I was right for all of you who were smart and stayed.

Gavin put on one of the finest “2 minute drill” drives I have seen.   With 1:07 left on the clock and 57 yards to go to hit pay dirt he started. He moved the chains, including 2 rocket laser throws from the left hash mark to the opposite side lines to big #15, 6’3” WR Wallace for critical first downs of 10 and 12 yards. By the way, for you well informed fans , this is the throw we call the “money ball” as it is the same throw the Pro prospects have to throw at the NFL combine to get the Big Money Contracts. Well, Gavin put on a dime.  Now Steve Blackledge of the Columbus Dispatch can out write me any day of the week so I am going to put up the whole article on this game so you can read it.

Then Gavin with 17 seconds left and the clock running with a first down inside the 10 yard line (I thought he should have spiked the ball to stop the clock) rolled left found no one open, juked a Darby line-backer , cut inside and dove the last 4 yards into the end zone over 2 defenders.  FINAL Central 17 Darby 13.    For those who left….. I TOLD YOU !!!!!!!!!

Here was the call…

Here is the link to the whole article on the game….  Read It.   http://www.dispatch.com/content/stories/sports/2015/10/23/westerville-central-remains-undefeated.html

Gavin, you are the real deal and should be going to play football in college…….    Gavin has an Ohio State scholarship to play baseball and pitch (he has a 93 mile an hour fast ball for those of you who do not know) and has been contacted by the Texas Rangers already.

Great job Gavin   Keep it up.   Looking forward to the State Playoffs.