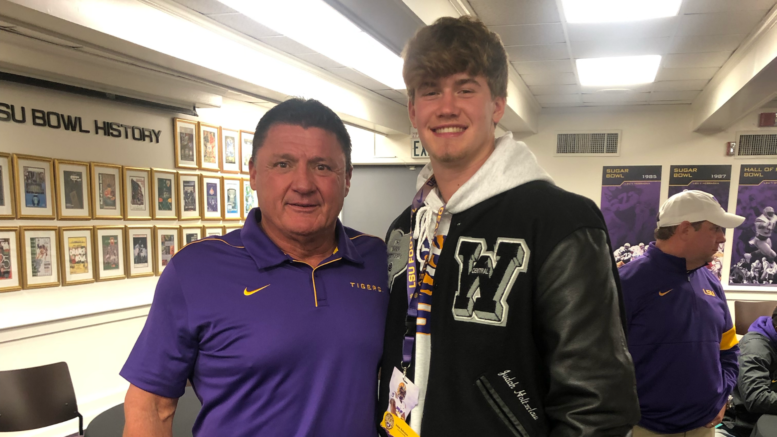 Judah Holtzclaw has had an incredible 4 weeks. Disappointed by being eliminate by just 7 points at the hands of Olentangy Liberty, Judah turned all of his personal awards into the whos who in QBs in the state.
First he earned First Team All Conference ., then went First Team All Region while being listed as a 3 star at 247 sports by Bill Greene.  Judah was also invited to the World Bowl National Combine in Orlando, Fl. in January. This is an invite only camp and includes going to the Pro Bowl on that Sunday  Then the invites kept rolling in.
Now that has brought two trips in the last 2 weeks to the number 1 and 3 teams currently in the nation. A week ago Judah and his parents made the trip to visit my friend Dabo Swinney at the fabulous Clemson University, and of course had a great time and they have him scheduled for their Elite QB camp in a few months.
This week it was further south and to the West as Judah was invited to the # 1 team in the country, the LSU Tigers. Again the Holtzclaw’s hit the road and arrived to be greated by the Head Coach Ed Orgeron who told Judah, “Do not leave until I can sit and talk to you after the game”.
Judah did just that and the coach came to visit with him again and told  him they planned to bring him back for an Official Visit in April.  Judah was excited to see Joey Burrows play as Judah got the privilege of working out with Joey  the summer before he left for LSU during one of Burrows workouts with Coach Sink.
Now it is back to reality for Judah to hit the workouts to continue his road to be the best he can possibly be.
Pictured above is Judah with LSU Head Coach Ed Orgeron.