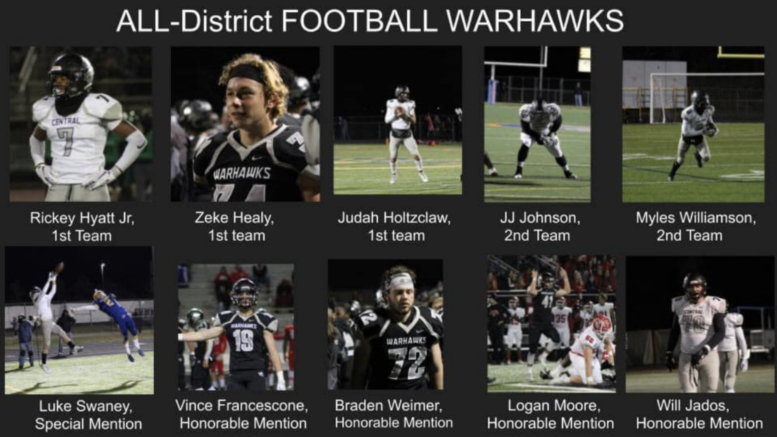 The accolades just keep coming for Coach Sink boys at Westerville Central HS in Westerville, Ohio.   Head Coach Brent Morrison should be as proud as I am of these guys and I am sure he is.   Judah Holtzclaw my very talented, State leading rated QB and first in overall passing yardage was named First Team All-OCC and First Team All-District in Ohio’s largest division D1.    Judah has been invited to Clemson for the game this Saturday and I received a call of interest from LSU this week.   No one I would rather see take the field to follow my man Joey Burrows then Judah Holtzclaw.

Zeke Healy LB extraordinaire, pulled off the same thing by being First Team All-OCC and First Team All-District along with being the co-player of the year in the OCC.   Great job by the fiery middle linebacker for the Warhawks, as it is rare when a defensive player gets this award and is a tribute to his domination on that side of the ball..   Luke Swaney WR, matched his two teammates by being First team All-OCC  and RB Ricky Hyatt was named First team All-District even missing a couple of games due to injury.  Ricky has been offered by Kentucky and has already committed to the Wildcats for next year.  The other mention is Myles Williamson WR who was named First Team All-OCC.

Even though it was disappointing ending for the Warhawks losing to Olentangy Liberty in the State Playoffs, by a score of 14 to 7,  these Coach Sink boys were able to show the State of Ohio that they are premier players and should be awesome at the next level of Football.

Look forward to hearing from Judah after his second trip to Clemson to see my friend Dabo Swinney, and watch his recruiting this fall and spring.   Judah decided not to play basketball (of which he is a very good player) this year to concentrate on being the best QB he can possibly be.    Holtzclaw should be awesome after another full year with Coach Sink, so look out for Judah and his posse’ next year.  Watch Judah’s highlight film here: Judah’s Highlights

Be the first to comment on "Holtzclaw, Healy, and Hyatt 1st Team All-District"