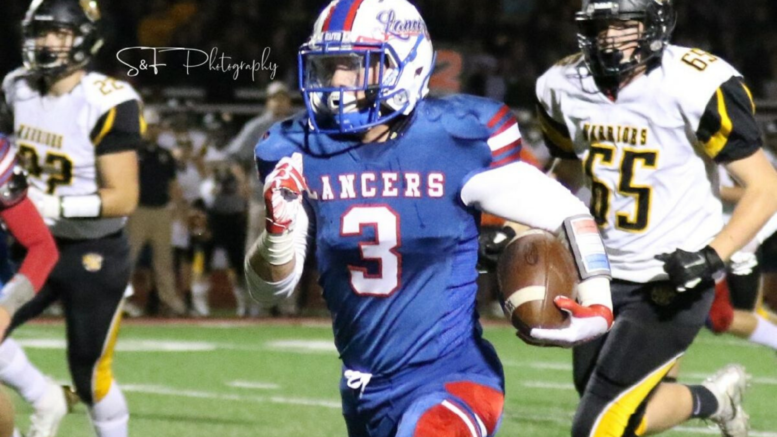 (Thanks to Steve Helwagen article from Newark Advocate 11/29/19, see other stories)

Hebron–  Connor Roesink did not grow up in the Lakewood school district, but the senior has left his mark on the Lancer Football program this season. The 5’10”, 185 pound Roesink transferred from Newark catholic to Lakewood for his senior year. He has been the Lancer’s starting running back and also contributed as a linebacker/safety on defense this season.

“Connor is a blue-collar kid, and he fits in with us in that sense,” Lakewood coach Jason Lee said. “He’s a student of the game. He has helped our kids to understand how to be that type of player. It’s like he’s been here for a while.  It’s a credit to him to come in and work hard and earn his spot and contribute with everything he does.” Lee added.

Roesink talked about his route that led him to Lakewood this year.  “I am originally from Pataskala, and attended Kirkersville elementary,”

Roesink said.  “It was in the fifth and sixth grade I decided to move to Newark Catholic.  Some of that was for athletics.” “I just felt I needed a change,” he added.  “I thought Lakewood would be a good fit for me for football and basketball. In addition to running back, I’ve played some safety and outside linebacker on defense.  I just want to contribute to the team any way I can.”

Last Friday, Lakewood snapped a six game losing streak, edging Watkins Memorial 29-28 in overtime.  Roesink had 13 carries for 48 yards rushing plus a multitude of catches and at least 4 solo tackles on defense as the Lancers improved to 2 and 7 overall.

Lakewood rallied from down seven late in that game as senior QB Connor Vierstra hit sophomore Brandon Allen for the game-tying  28 yard TD as time expired.  Vierstra then scored on a 7 yard run in overtime and Alex Pletcher tacked on the extra point for the win.

“We’ve had the red zone curse, and it’s been tough down there all year,” Roesink said. “But all of our hard work paid off in that game.  It’s been a long time since this program has been really successful. We’re just trying to turn it around.”  Allen, whose heroic run after catch sent the Watkins game into overtime, credited Roesink for his leadership.  “He’s had an amazing impact,” Allen said. “He’s such a great person and great leader. He helps everybody throughout the game and makes sure we have the right mind set.”

I am so proud of Connor Roesink and his” impact on the game” and “student of the game” attitude. He is destined to be a big success in anything he does in the future.  His Lakewood lancers face Utica Friday night for his final HS game.   Go Lakewood   Coach Sink.