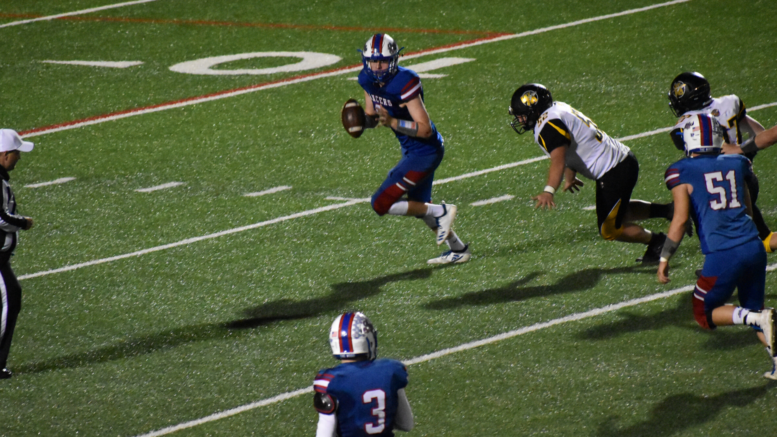 The first quarter started out to be the Connor Roesink 5’10” 185 lbs. run the ball  to victory theory of offense.  He carried the ball for a vast majority of his 48 yards early in this game and it is what gave my big 6’4” 200 lbs. QB Connor Vierstra his best game of the season.  Then with play action and the Watkins defense keying on  Roesink, Vierstra started pulling the ball as he should and making some of the biggest plays of the year.   Colt Vierstra WR was instrumental as was Noah Sniadack SR, and Ryan Ogilbee SR and of course Sophomore  Brandon Allen WR and Roesink RB in catching key passes from Vierstra all night.

Connor Vierstra grew up into the big time QB we knew he could be Friday night and it was an awesome sight to see.   Connor threw for 220 yards on 21 completions for 36 attempts and ran for 140 yards.    He had 2 TDS passing and 2 TDS running the ball.

Now all of that is great, but what was most impressive about this game, was Vierstra’s leadership and ability to read and make plays against a fast and big defense.  He also showed he wasn’t finished until the final bell rang leading the team with an incredible drive to close the game by throwing a 28 yard TD pass to Brandon Allen who made an electrifying finish by running the ball into the end zone after the catch. Then Connor finished off the game in Overtime with the winning TD by running the ball 7 yards into the end zone.  Final Score Lakewood 29 Watkins 28

It is my opinion that if the season had just started the Lakewood season might have ended 6 and 3 instead of currently 2 and 7 and we might be looking at a playoff team.  These young players with leadership from Seniors Connor and Connor are starting to believe how good they can be. Hopefully they end the season with one more victory over Utica Friday to finish the beginning of the turnaround in Lancer town.

I for one, have believed in these kids all year and it is awesome to watch them finally mature like they have.  Coach Sink