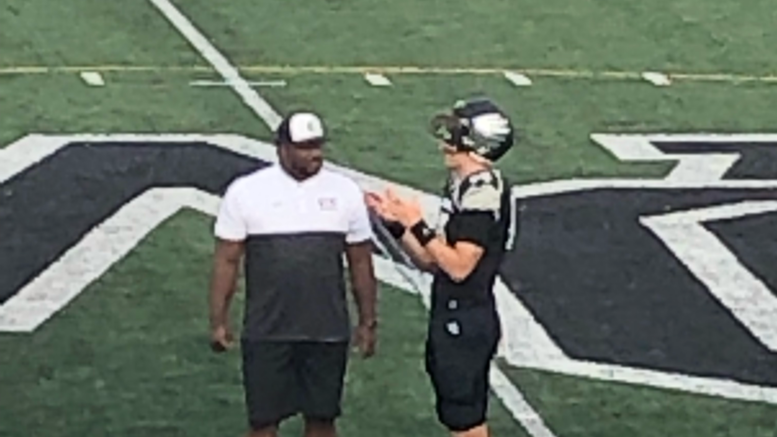 We were not surprised to watch the highest scoring offense in the State of Ohio win this game but we were surprised at the score.

Incredibly important was to watch my 6’5’ 218 lbs Junior QB Judah Holtzclaw take major strides in his ability to see, define, and manage a lot of pressure.   The competition for the Warhawks so far this year has not been elite and Pick North may not have it’s best team ever but Coach Morrison made one of his major nemesis look like an average football team by beating them with an excellent performance on both sides of the ball.   Judah, in the first half was sacked a couple of times but bounce back he did and figured out how to win the game by taking what the defense was giving him and ending the first half with a 7 to 0  lead on a Rickey Hyatt TD.

After a one and a half hour lightning and rain delay the second half became the full package for the Warhawks.  Judah threw a 23 yard TD to Luke Swaney his big Wide Reveiver, and a 12 yard Td to Jace Jarvis, and had major gainers in key situations of 30 more yards to Jace Jarvis, a 22 yarder to Rickey Hyatt and a 38 yarder to Myles Williamson.   All together Judah put up 175 yards passing going 10 for 21 and 2 TDS.

Rickey Hyatt the outstanding RB after committing to Kentucky this week to follow in the footsteps of another Sink Coached RB Bennie Snell Jr. (now with the Pittsburgh Steelers) had a stellar night with 211 yards on 29 carries and 3 TDS.

Judah Holtzclaw continues his road to excellences with his yearly totals looking like this.  He is 46 for 69 and 871 yards passing with 12 TDS and only 3 Ints.  What I am most proud of is his passer and QB rating, as he has a 66.67 % of completion, and 17.4 % TD ratio, and Interception ratio of 4.3 and an amazing overall QB rating of 131.2.  I might add, every QB in the NFL would take this rating after 4 games of play.

Great job so far and now back to work to get better is the theme for this week for my Star QB Judah Holtzclaw.     A foot note should be added, as my hat is off for the job my good friend Josh Harris (pictured above with Judah) has done with Judah teaching him his offense and reads and supporting him in every other way.   Thanks Josh and great teaming up with you.  Awesome job to all the Warhawks!