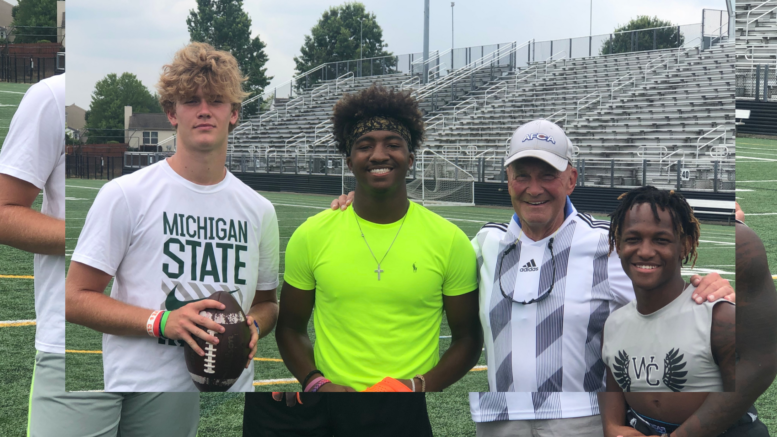 Everyone talks about extra effort but few can describe it when you ask them about what they did.   Well pictured above is what 3 of those Stars did today at 15 minutes after those 2 a day practices ended at Westerville Central HS in Westerville, Ohio.  QB Judah Holtzclaw 6’5” 215 lbs. called on his own to schedule an extra session with Coach Sink, so that he could work on the accuracy,  velocity and power of his delivery.    Of course he needed a couple of WRS to show up and catch for him, so 2 more “stars of the team” showed up.

Ricky Hyatt and Stephen Hartley both outstanding speedsters with D1 offers did NOT say to Judah, “Oh, man we are tired, can’t we do this some other time?”, but instead came with great attitudes and had fun helping their star QB get better and cheering him on when he threw balls almost too HOT to handle.   It is no wonder that these two guys were both named Captains of their team this week and Coach Morrison knows he can depend on these guys to have that leadership every great team needs.

By the end of the work out Judah was throwing what we call the “Money Ball” in the NFL, which is a 20 yard out from the opposite hash mark, on a rope.  That means without any trajectory the ball leaves the QB’s hand and goes the entire distance without loosing any speed or velocity all the way to the sidelines, and as Ricky said when he caught it, “woah, that was a rocket.”  The reason it is called the “Money Ball” is because that is the ball all the drafted QBS have to throw to get the huge contracts at the NFL combine.  Judah Holtzclaw is a Junior in High School, so no wonder he is listed in the top 4 prospects in the country.  Make sure you put Westerville Central on your watch list this fall because Judah, Ricky, Stephen and company will be well worth the price of admission and travel expense to see the Warhawks play. This is one more example of doing what true STARS do to pay the price and reap the benefits of extra effort !!

Be the first to comment on "What Stars do after 4 hours of 2 a day Practice !!"