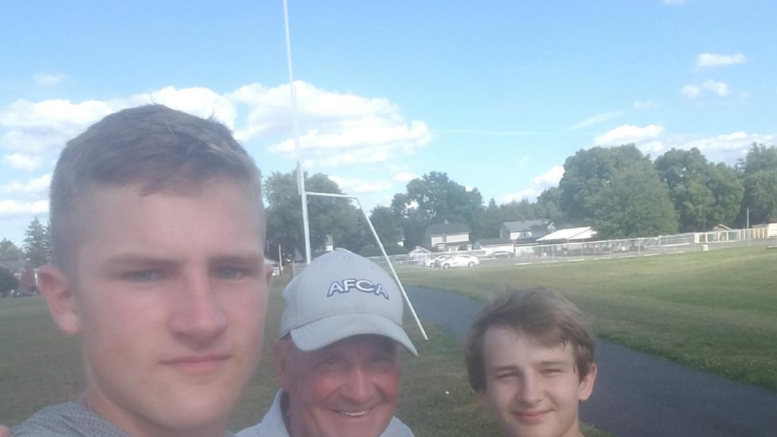 As I wrote last week on several of my QB’s and WR’s, working extra time during 2 a days and it is paying off for all of them.

Matt Carlisle  6”3” 190 lbs. Senior QB from Newark Catholic HS in Newark, Ohio is shown here with one of his Wide Receiver’s,

Slaughter Evans also a Senior.  Both are shown here after working an early Extra session with Coach Sink, just spending that Extra effort that it takes to be a notch up from all the competition.  Slaughter and Matt are both  basketball players as well for the Green Wave and will be the keys to the passing game this year on the gridiron.

Newark Catholic opens their season Friday the 30th against Edon High School Edon Ohio at Northern Ohio University field at 7 pm.  The kids are excited about playing on a neutral field at a prestigious University in North West Ohio.  Matt has a big strong arm and has developed into one of the top QB’s in the State of Ohio in his division and Slaughter is going to have some big success catching those rockets.  Good Luck to some awesome young men at Newark catholic this season.

Be the first to comment on "It’s Infectious; Matt Carlisle Extra, Extra !"