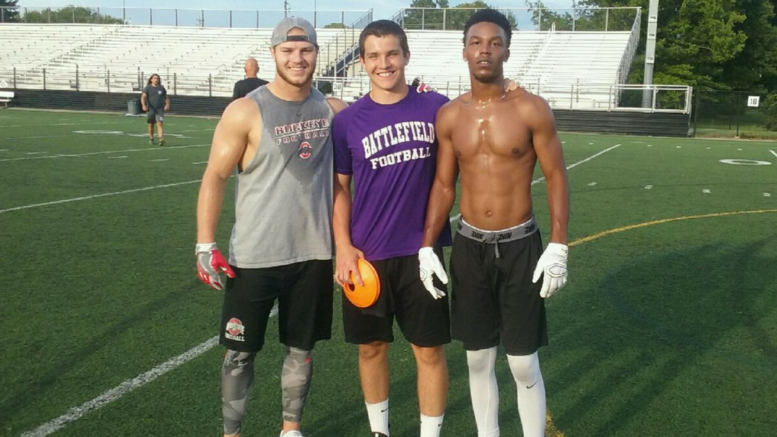 It is not easy to work young men that are 6 ½ hours’ drive away from Central Ohio.  But is it do-able if they want it bad enough?  Yes it is.  Graham has made the trip here to spend 2 days working hard on his QB skills and man has he got it going this year.   I also made a trip to Northern Virginia and did a clinic for Graham and several wide Receivers who were from both colleges and high schools in that area.  We had a great time and were able to achieve a lot of success for all the kids.

Graham and his Battlefield HS have turned that success into a 3 and 0 record so far and if you watch this highlight film, you will see what I mean.   Even though he plays under center most of the time, he has been able to throw for 363 yards and 6 passing TDs and rush for one as well.   The amazing part is his completion average going 23 completions for 29 attempts for an incredible 79.3 % completion average.  Now we can just about put that up against anyone.  I am very proud of him and the job he is doing this year and look for greater things in the near future. If you are in that area, go out and see Graham and his boys perform, It will be worth the price of the ticket, I promise.

Pictured above is Graham Walker with Jared Drake of Ohio State and Martee Morse of Otterbien during a workout at Westerville Central when Graham was here. Here is the link for his new 3 game highlight film.

Be the first to comment on "Graham Walker Battlefield HS Haymarket, Va."