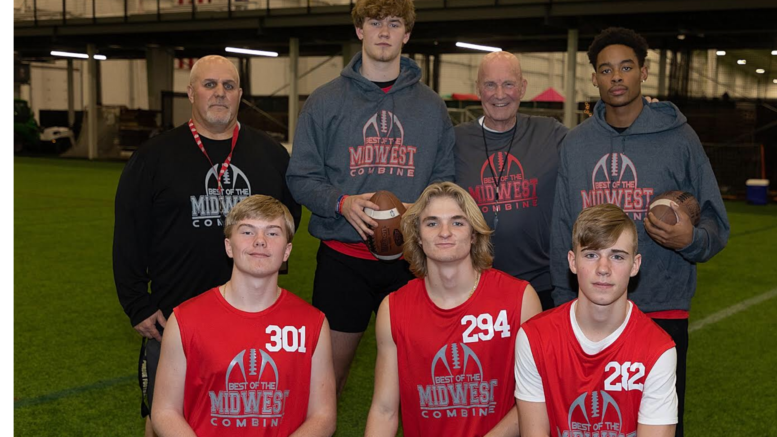 Coach Sink has had the privilege of coaching this prestigious spring camp put on by  Greg Brookey in Indianapolis every February.  This is the tenth year for the camp for which Coach Sink has been a coaching member for more than half of those years.  Greg Brookey has had over 800 D1 players come through this camp, and had a member of both of the teams in the Super Bowl this year.  He has developed and coached an incredible number of young men that are represented on most of the teams in the NFL.   Congratulations to Greg Brookey on 10 fabulous years of developing and running this excellent camp.

MVP of the Quarterback position this year is Coach Sink’s outstanding 6’6’ 225 lbs. 2021 class, Judah Holtzclaw from Westerville Central HS in Westerville, Ohio and Duce Taylor, a talented dual threat QB from Fort Wayne Indiana.  Both of these QBS were unanimous choices by the coaching staff of the camp in their division, and both performed at a very high level throughout the camp.  You will see both of these fine QBS along with the rest of the MVP’s from this camp playing at major colleges across the country soon.

Coach sink had three other QBS and several WRS that also attended the camp. 2021 QB Brittain Long from Mt. Vernon High School in Mt. Vernon, Ohio also had a terrific camp even though it was his first competitive camp.   He did more than hold his own, firing the ball on all cylinders and competing right up to the last throw which was a 50 yard post for a completion. We are looking for a stellar year from him this upcoming season.  The other two performers, were both Freshman, Brody Parsley from Central Crossing high School in Grove City, Ohio a western suburb of Columbus, and Bradyn Fleharty from Bath High School in Lima, Ohio.  Coach sink was extremely proud of both of these guys and they way they competed against the Best in the Midwest QBS, all of which were older than they were.  Just wait till next year for these two, they will be fun to watch.   It was great to have Coach Sink’s partner in the younger division, Paul Kilzer along to help coach the QBS, and he was on top of his game coaching as there were a total of 57 Quarterbacks in the camp.

On the 29th of February, Judah Holtzclaw will be competing in the exclusive, invitation only ESPN’s Elite 11 Regional QB competition in Atlanta, Georgia.   Coach Sink will be traveling with Judah and his parents Ray and Sharmin to this event and ask that all of our fans and fellow stable partners cheer for our buddy Judah.  Pictured above is  Greg Brookey Camp owner, Judah Holtzclaw MVP, Coach Sink, Duce Taylor MVP, front row: Brody Parsley, Brittain Long, and Bradyn Fleharty.

Be the first to comment on "Holtzclaw MVP of “Best of the Midwest” Camp."