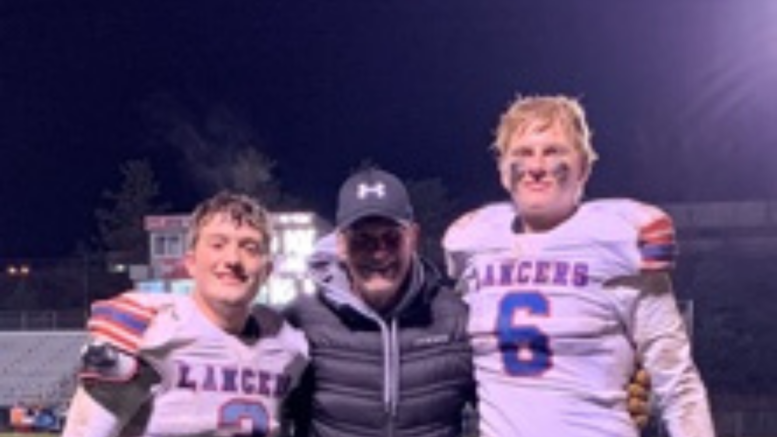 Connor Roesink 5’10” 185 lbs. RB and Connor Vierstra 6’4” 200 lbs. QB took total advantage of their last game in their Senior year for the Lakewood Lancers by coming to play like neither young athlete has played football before.  Both of these guys and several other Lancers have been working very hard all year with Coach Sink and it certainly paid off Friday along with the coaching of Head Coach Jason Lee and his staff, including Offensive coordinator Coach Poulnot.    It was a team effort but these 2 guys played above and beyond and put a thumping on Utica 41 to 14.

Roesink put up some outstanding numbers by rushing for 81 yards in 12 carries and running for 2 TDS of 4 and 6 yards and then threw a TD pass to the outstanding Junior WR Colton Vierstra of 34 yards.  It was a half back pass which he caught on a wheel route from QB Connor Vierstra, then pulled up and threw a perfect spiral laid in the middle of the end zone with great timing to the outstretched hands of Colton Vierstra.  Connor Roesink also caught 5 balls for 65 yards so the total offensive yards for him were 179 for the night. (This does not include a tremendous 34 yard pick up that got called back for a penalty.)  Colton finished the night with 108 yards receiving on 4 catches and the TD.

Connor Viesrtra was equally impressive with some massive totals of his own,  and I will say he is about to make someone very happy on the next level by playing QB in College.  He has matured incredibly in the last 2 weeks and become the QB, Coach Sink new he could be.  Connor V. threw that tight spiral all night long with accuracy to go with it, for 180 yards in the air.  He also had  a team leading 102 yards on the ground and 3 TDS of his own covering 12, 2 and 15 yards each.   Connor V. was reading the defense like a top QB should, so when he didn’t give it to Roesink he pulled it perfectly and ran it well.  Connor Vierstra’s total yards for the night were 282 yards of offense.

It is important to mention the play of senior Zack Christ (his first year playing football), and Noah Sniadach who contributed mightly on both sides of the ball,  Sophomores Brandon Allen and Ryan Olglesbee, who both have a bright future with the Lancers.   Also, the play of Zeb Mansker who was injured  for a lot of the season but was a mighty contributor in the last 2 games.  All of these guys spent time with Coach Sink every week and all summer before that.

It is too bad that these two Connors’, Roesink and Vierstra don’t have one more year to play together with this coaching staff and the rest of these players as they could certainly complete the amazing turn around they have started in Lancer football.  It is for sure going in the right direction with the addition of my son and Connor’s dad, Tim Roesink coaching and overseeing the Jr. high development..   I am so proud of both of these two being the kind of young men they are and the football they have played.   It has been a real pleasure to be the private coach of all of these guys, Coach Sink.   Pictured above Connor Roesink, Coach Sink, Connor Vierstra