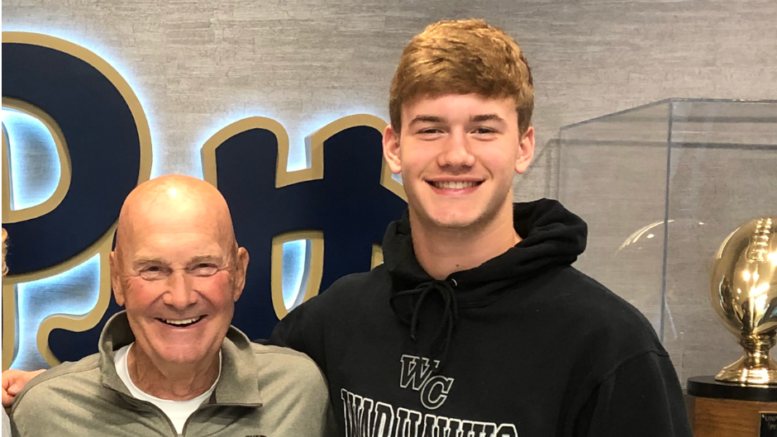 The Westerville Central Warhawks opened their season with a resounding 63 to 6 win over neighboring Whitehall HS.  All this was instigated by Judah Holtzclaw my 6’5” 218 lbs  Junior QB in his first outing as a varsity starter.  The young,  nationally highly rated Holtzclaw wasted no time at all by throwing his first TD to one of the team Captains and also highly recruited Ricky Hyatt RB and all purpose athlete.   That one was for 26 yards.

Staying on course in the next series, Judah found his big strong Junior WR Luke Swaney for 29 yards  to the back of the end zone for touchdown # 2.  By now you can tell Judah is having fun carving up the Whitehall defense so there is no reason to slow down.  And slow down he didn’t, firing a 35 yard Td strike to WR Kylin Byrd.

Capping off the first half was one more Td of 12 yards, this time to another team captain, the speed demon and Mr. Quick (as we call him) Steven Hartley, another top recruit off this fine young team that Head Coach Brent Morrison has assembled.   That is all that was needed from the #1 signal caller for his first night out.

So you talk about numbers, there is nothing wrong with this for one half of football. Judah Holtzclaw went 9 of 16 for 191 yards and 4 Touchdown passes in his first outing as the starter at Westerville Central.   Now if you double that, had he played the whole game, that is a lot of rockets landing in the right place for any QB anywhere.   In the next few weeks you need to get to The Warhawk field to watch Judah and his team mates for they will entertain you in a big way.   Great job Judah Holtzclaw.

Be the first to comment on "Judah Holtzclaw opens with a Bang!!"