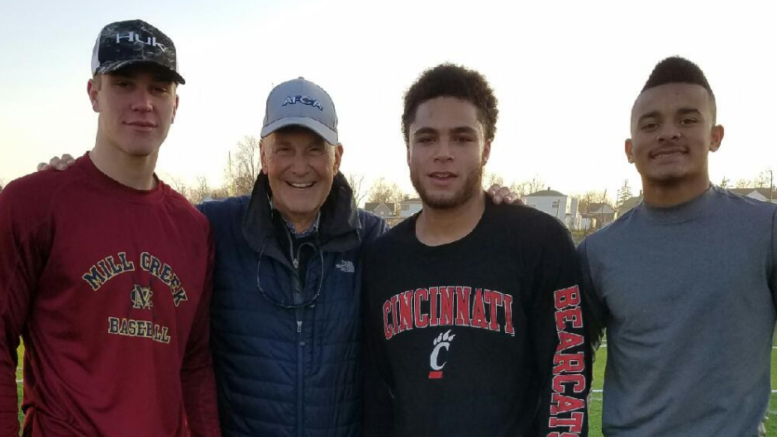 We had an awesome work out Sunday on the beautiful new turf at Lima Senior HS field on a cold December day in Ohio.   Johnny Caprella my 6’2” 200 lbs. outstanding Senior QB was wanting to work out and just keep getting better.   Now, I have quite a few kids like this but not many are doing this the day after playing a varsity basketball game on both of the 2 days previous, scoring 17 points in each game and having a boat load of assists and winning both games.

Mr. Competitor is a better name for him.

He asked a couple of Lima Senior Wide Receivers to join him, on my left is Senior WR Brayden O’Dell and on his left is a Freshman Isaiah Funches-Foster, both of which are certainly excellent WRS for their ages and grade levels.   Fun would not be good enough to describe this work out.   We went one hour and a half at what I call a HARD Pace.   But you should have been there to see the performances of these three kids.  I do have to commend Isaiah and Brayden as it was their first Coach Sink work out and they had no idea of what was coming.

Johnny on the other hand was eating up the Mid-winter work out with throw after throw of not only college level but even beyond.   At one point, I had Johnny making moves in the pocket and looking off receivers and then having to make a decision on which receiver was open, on my Command.  Let that “Sink” in, and imagine how quickly and accurately you have to throw the ball and down field in most cases. On one of Johnnies spectacular throws, I had the Isaiah on the inside, Brayden on the outside and had them running a zipper route (some call it a crossing route) on the left side.   I made Johnny drop three, look off to the right, back step away from pressure and I yelled “Hit Isaiah on the outside!”.   At that point the speedy Freshman was about to cross the 40 running full out,

and the cool, collected Caprella set his feet and let go with a 56 yard 2 ball perfectly placed right over the out stretched hands of Isaiah for a score on anybody’s field anywhere.

We then completed the work out with 10 fades to each receiver in the end zone starting from the 35 yard line, Johnny on the 40, throwing to the back pylon in the corner of the end zone.   Caprella would drop three and throw these balls directly over the corner with perfect timing hitting the receivers 53 yards down field on each throw.   Brayden was the star catcher on these as soon as he perfected his routes.   Johnny Caprella, one of those kids that makes me keep getting up each morning and living the day that God gives me to help my kids get better.   “Never, Never, Never, stop getting better!”  Merry Christmas to all   Coach Sink.    Caprella, Sink, Brayden and Isaiahleft to right in picture above.

Be the first to comment on "The Great ones never stop working !"