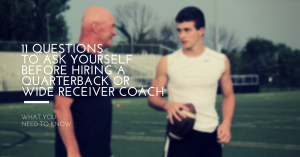 Be the first to comment on "11 Questions to Ask Yourself Before Hiring a Private Quarterback or Wide Receiver Coach."