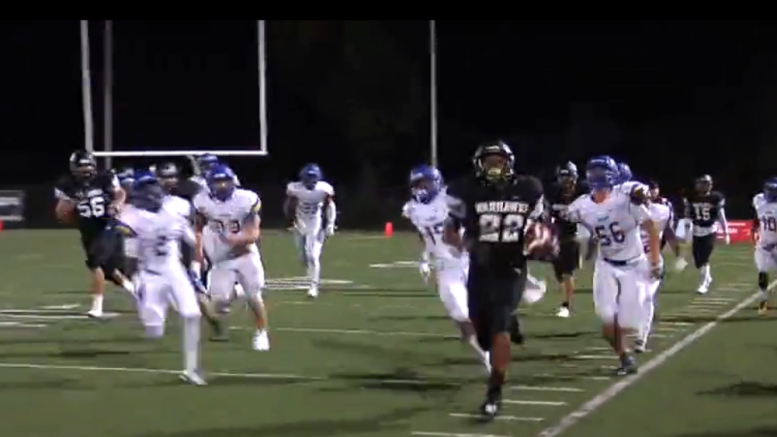 Coach John Magistro rolled his eyes on Friday night when asked if he liked Westerville Central’s chances headed to overtime against visiting Gahanna in a season opener.

“No,” he said, matter-of-factly. “We were beat up, exhausted and getting dominated up front. Apparently, we got a second wind, and the kids were able to reach down and pull it out. That’s the only way I can describe it.” From Steve Blackledge article in Columbus Dispatch.

It wasn’t pretty, but they made it happen.  Gavin Lyon our senior QB and Bennie Snell RB and Cedric Frierson WR all of which have been regulars with Coach Sink for the last 3 to 4 years had a hand in the Westerville Central win over Gahanna Lincoln Friday night 28 to 21 in overtime.

John Majestro the hall of fame coach, had to do his mastery but it worked once again.   Gavin Lyon ran in the winning TD from 12 yards out after Bennie Snell the Kentucky commit did his thing with TDs of 44 and 75 yards and Cedric ran a beautifully designed reverse in for  a 43 yard TD as well as putting up big numbers on special teams.  Gavin is such a great field general and Coach Majestro commented on him having the perfect QB personality and we think he just may be right.  He is so cool under pressure and said to Coach,”There is no adrenaline rush like playing Quarterback on Friday night in Ohio high school football.”  Great opener and congratulations for Coach John Majestro, Gavin Lyon, Bennie Snell, Cedric Frierson and the rest of the Warhawks.

Just a little sidenote: Ohio State Buckeyes Jared Drake (2014 offensive player of the year in Ohio) and starting tight end Nick Vanette both former Westerville Central grads were enjoying themselves on the sidelines during the game.

Be the first to comment on "Gavin Lyon, Bennie Snell, and Cedric Frierson get the Job done for Westerville Central"